See information below about ...

Alcohol is the most used drug on college campuses, including Cornell. Despite its common use, the majority of Cornellians drink moderately, or not at all (Alcohol and Social Life Survey, Fall 2018). Lots of Cornell students know how to have fun without alcohol. See our Alcohol and other Drugs Initiatives page for more data. In fact, one third of Cornell undergraduate students do not drink alcohol during their time at Cornell (Fall 2018 Alcohol and Social Life Survey). There are lots of reasons why students choose to abstain from using alcohol; these include religious beliefs, personal values, compliance with the law, health concerns, medication interactions, family history of substance abuse, or being in recovery.

Alcohol is the third leading preventable cause of death in the United States (NIAAA, 2019) and NIAAA researches estimate that 1,825 college students die from alcohol-related unintentional injuries each year.

Every student should know …

Enjoy the buzz ... reduce the risks

If you drink alcohol, try these tips to enjoy the buzz while avoiding the risks and negative consequences.

Your BAC (Blood-Alcohol Concentration) is determined by milligrams of alcohol per 100 milligrams of blood, usually expressed as a percentage. For example, .10 BAC is 1 part alcohol for every 1,000 parts blood.

An “optimal buzz” is typically experienced when your BAC slowly rises to a level no higher than a .06. A DUI (Driving Under the Influence) in New York State is determined by blowing .08 or higher in a breathalyzer test. 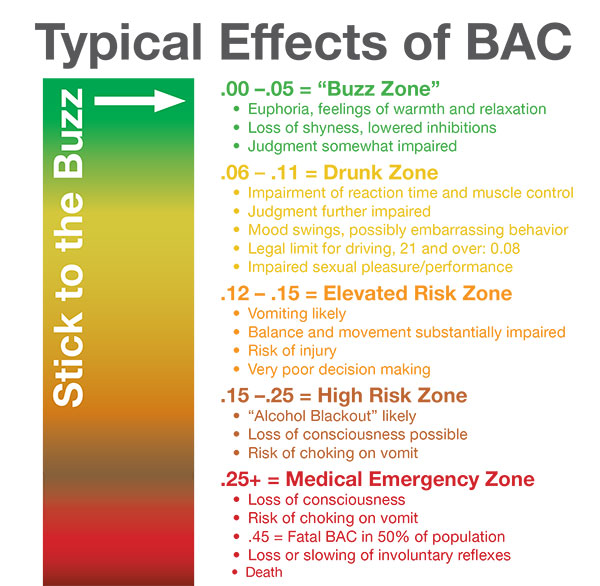 The biphasic (two-phase) response to alcohol

When a person consumes a moderate amount of alcohol slowly, the alcohol produces a mild “up” feeling – or a “buzz.” This is what most people are looking for and enjoy when they’re drinking.

This “up” feeling, followed by a “down” feeling if you drink too much, has been described as the biphasic response to alcohol: 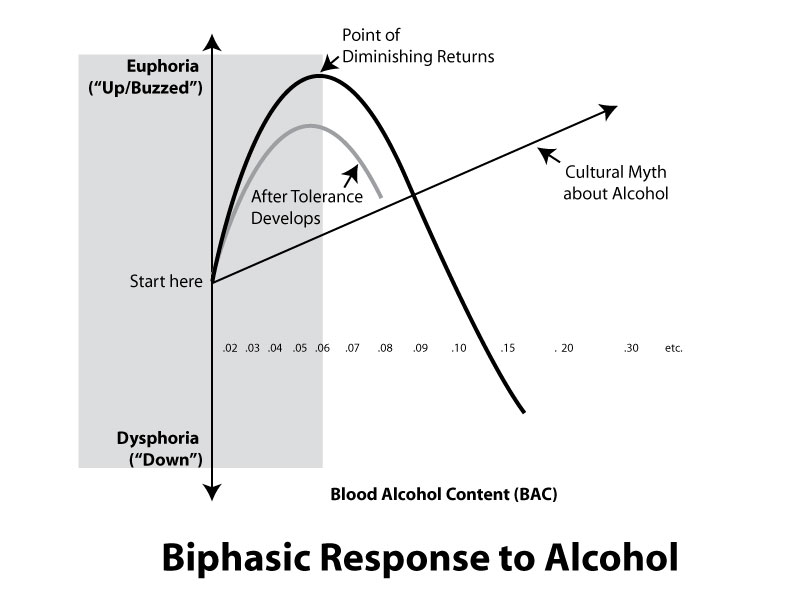 See the tips above (“Enjoy the buzz ... reduce the risks” and “Understanding BAC”) to learn strategies for enjoying alcohol without passing the point of diminishing returns.

Think you may have a problem?

Please see our Alcohol & Other Drug Services page for information about the individual counseling and support groups we offer, our BASICS program, and the many campus and community resources available to you.

The vast majority of students at Cornell do not smoke, and tobacco use among college students has decreased significantly over the last 15+ years – especially the use of cigarettes and chewing tobacco. That said, use of e-cigarettes is on the rise.

Tobacco is a plant, the leaves of which are smoked, chewed, or sniffed to achieve a variety of effects.Tobacco contains the chemical nicotine, which is an addictive substance.Tobacco smoke contains more than 7000 chemicals, 69 of which are known to cause cancer. Tobacco that is not burned is called smokeless tobacco. Including nicotine, there are 29 chemicals in smokeless tobacco that are known to cause cancer.

E-cigarettes are a type of electronic nicotine delivery systems (ENDS). More commonly called “e-cigs,” “e-hookahs,” “JUULS,” and “vapes,” e-cigarettes are the most commonly used nicotine product among youth. These battery-powered devices heat a liquid into an aerosol that the user inhales.The liquid usually contains nicotine, flavoring, and other additives. E-cigs are largely marketed to kids; they come in fun shapes, sizes, flavors, and colors. But they aren’t harmless.

The effects of nicotine exposure can be long-lasting and include lower impulse control and mood disorders. If you already use tobacco or e-cigarettes and want to quit, make an appointment with a Behavioral Health Consultant at Cornell Health. Cornell Health’s pharmacy also sells nicotine replacement products (gum and patches).

If you want help cutting back or quitting …

The effects of marijuana can vary widely, depending on the potency of the drug, any tolerance you may have built up, the location of where it is used (e.g., how safe you feel in that environment), and other factors about how you’re feeling at the time of use.

Short-term risks: While you won't overdose on marijuana, short-term risks include impairment to judgment and complex coordination (e.g., driving is NOT recommended), increased heart rate, and other symptoms such as paranoia, mild hallucinations, or anxiety. For people sensitive to the chemical agents sprayed on marijuana plants, use may cause painful migraine headaches. Marijuana can also impair memory and other cognitive functions for up to 48 hours after using.

Long-term risks: There is little evidence to suggest that marijuana causes long-term harm to memory and cognitive functions (effects usually fade about 48 hours after use). However, with continued use, you CAN become dependent on – and addicted to – marijuana. Chronic, heavy use can also damage your lungs. As with any drug, chronic exposure as a child or adolescent could result in changes in your brain since it is developing rapidly during these years.

Ritalin, Adderall, and other prescription stimulants are “central nervous stimulants” commonly prescribed to help people diagnosed with Attention Deficit / Hyperactivity Disorder (ADHD) focus and concentrate. Nationally, some people without prescriptions take these stimulants in hopes of increasing mental alertness and decreasing fatigue – while studying, or in social settings. (Note that it is illegal to take prescription stimulants without a doctor's prescription.)

Short-term risks: Depending on the dosage, you may find yourself feeling depressed and irritable after the peak effect of the drug has passed. Other side effects include dehydration, hot flashes, nervousness, appetite suppression, stomach pains, palpitations, nausea, heavy sweating, decreased libido, and headaches. Prescription stimulants interact negatively with a number of other substances; if you’re experiencing problems after taking a prescription stimulant, seek medical help (you can call us 24/7 at 607-255-5155).

The MDMA in Molly and ecstasy usually produces a mild, euphoric state within 20-40 minutes after ingesting a tablet, with the peak effect occurring 60-90 minutes after. Its stimulant effects can increase your energy and decrease appetite.

Short-term risks: Potential short-term negative effects may include anxiety, confusion, depression, sleep problems, and paranoia. Also, people may experience muscle tension, involuntary teeth clenching, increased heart rate, increased blood pressure, and increased body temperature. Deaths have been associated with this substance, usually as a result of heat stroke. If you decide to use ecstasy, it is important to stay cool and well-hydrated. Ecstasy can also be especially dangerous for people with heart problems.

Long-term risks: Evidence suggests that long-term use or a single high dose can cause a long-term loss of serotonin, an important chemical in the brain that regulates mood. This sort of damage could cause subtle but significant impairment to cognitive abilities, memory, arithmetic calculation, complex attention, and increased impulsiveness.If you have used Molly / ecstasy / MDMA and are worried about any effects you’re experiencing, please schedule an appointment with a counselor or medical provider at Cornell Health.

Heroin is snorted, smoked, or injected. It can elicit a warm, euphoric feeling – although responses vary depending on dosage, the purity, and your own physical condition. Less than 1 percent of Cornell students report having used heroin, although its use is growing in many parts of the country, including Tompkins County.

Short-term risks: The most serious short-term risk associated with heroin is overdose / sudden death (most common when injected). Other less serious effects can include experiencing nausea, constipation, diminished sex drive, and withdrawal.

If you inject heroin: It's important to use a sharp, sterile syringe, clean works, and fresh sterile water. If possible, use a fresh needle every time. Avoid sharing needles with others. If you don't have new needles, go to an exchange: Ithaca hosts the only rural syringe exchange in New York. If you have your own needles, be sure to dispose of them safely (see information about “Disposing of medications & sharps” on our Pharmacy page).

If you want help cutting back or quitting …

Please see our Alcohol & Other Drug Services page for information about the individual counseling and support groups we offer, and the many campus and community resources available to you.