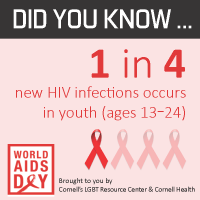 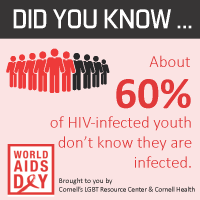 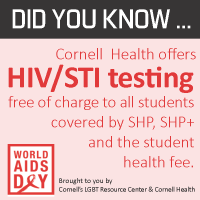 What is World AIDS Day?

World AIDS Day takes place on December 1 each year. Whether you're here at Cornell, or studying in another part of the world, December 1 is an opportunity for all people to unite in the fight against HIV, to show support for people living with HIV, and to commemorate those who have died from an AIDS-related illness. Founded in 1988, World AIDS Day was the first ever global health day.

How big of a problem is HIV?

World AIDS Day is important because it reminds the public and government that HIV has not gone away – there is still a vital need to raise money, increase awareness, fight prejudice and improve education.

What should I do?