Cornell Health is proud to be recognized as a national leader in college health.

As a unit within the Division of Student and Campus Life, our goal is to support campus health, and foster student readiness to learn and participate fully in the Cornell experience (see “Our mission and vision,” below). We strive to provide high-quality care that recognizes the experiences, values, and needs of the individuals who make up Cornell’s diverse community.

View this four-minute video for an overview of the services and support options you can find at Cornell Health:

To foster lifelong learning and well-being through innovative services and strategies that promote the physical, emotional, and social health of individuals and our diverse campus community.

To support the readiness of our community to learn, to participate fully in the Cornell experience, and to achieve academic, work, and life success.

How we advance our vision: 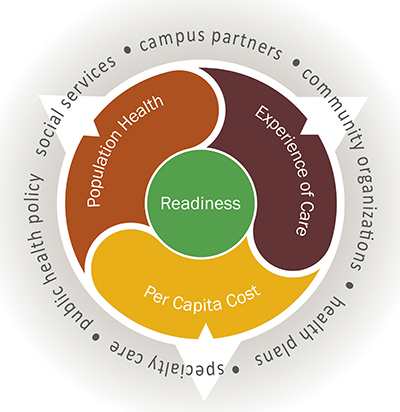 The above framework is modified from the Military Health System's Quadruple Aim - based on the Institute for Healthcare Improvement's TripleAim (a guide for optimizing health system performance and outcomes).

Our commitment to diversity & inclusion

Cornell Health is committed to providing respectful, responsive care to all individuals who rely on our services. We recognize and celebrate the diversity of our patients and clients, and strive to be inclusive of the many cultures, identities, experiences, practices, and values represented among our students and community members.

Ways in which we prioritize inclusion and diversity include:

Every day, through every interaction with a patient or client, our goal is to meet each person with interest, respect, sensitivity, and compassion. We welcome you to contact us regarding questions, suggestions, or concerns regarding our commitment to diversity and inclusion.

Our commitment to confidentiality

We want all of our patients and clients to feel comfortable seeking the care and support they need – and sharing questions and concerns with us – without worrying about privacy issues.

All medical care and counseling at Cornell Health is confidential. Your health records are separate from all other university records, and the privacy of this information is protected by law. We will never release any of your information without your written permission, except in specific instances to protect you or others from harm.

Please refer to our Confidentiality and Patient Rights page for more details.

Our history & transition to “Cornell Health”

The original Gannett Clinic opened on Ho Plaza in 1956, named by the Gannett Foundation to honor media mogul Frank Gannett, CU 1898. In 1979, the facility was expanded to meet the needs of a growing student body. The clinic was renamed “Gannett Health Services” in 2000 to reflect the expansion of health services beyond the Ho Plaza facility, when several Gannett departments moved to other campus buildings due to space constraints.

Gannett was renamed “Cornell Health” in March 2017, in anticipation of our new health services facility opening in summer 2017. An update and expansion of the original Gannett building, the new Cornell Health facility increases access to care for a student body that has doubled in size since Gannett first opened, and increased utilization of health services by 250%. The project has been a strategic priority of the University since the early 2000s, and was funded through a combination of university funding and the gifts of generous donors.

Learn more about our history, our philosophy of care, and our transition from Gannett to Cornell Health in our Foundations of Cornell Health document, published in November 2015.