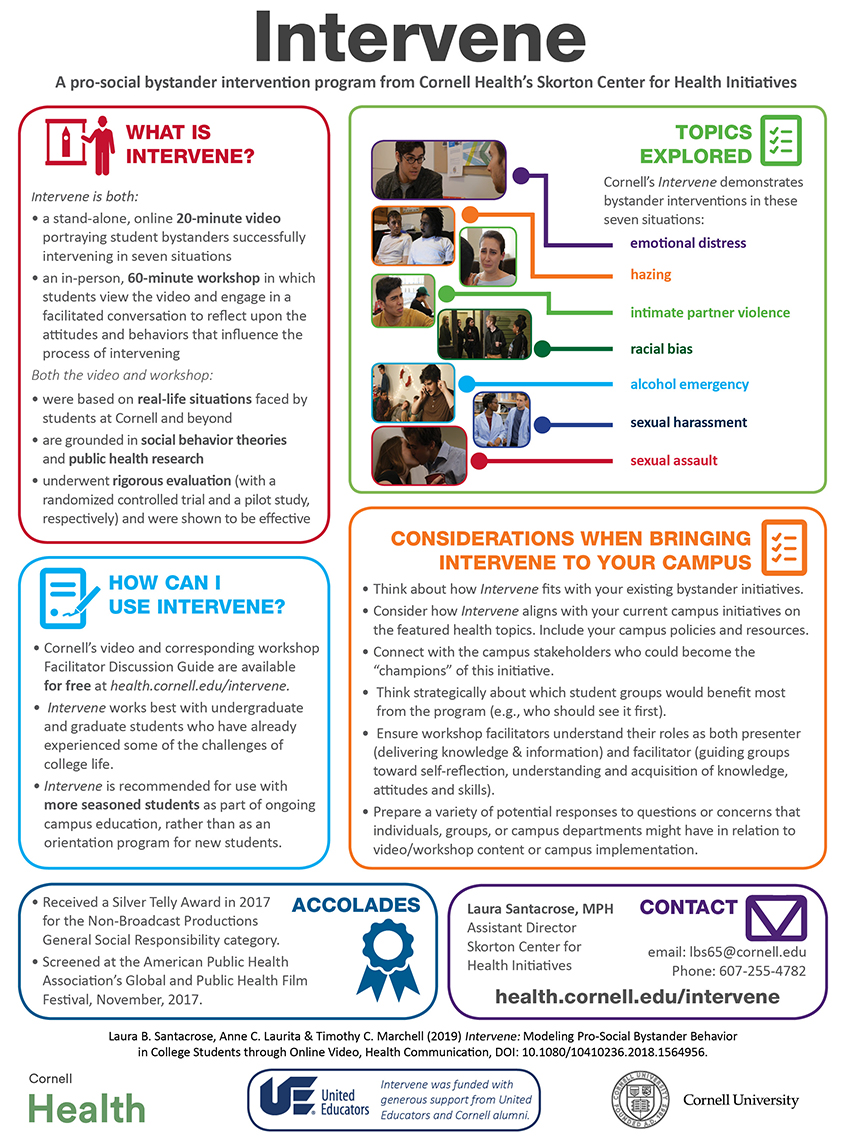 The Skorton Center for Health Initiatives at Cornell Health, in collaboration with the Cornell Interactive Theater Ensemble, has developed a new bystander intervention video and workshop called Intervene © 2016.

Intervene is both a video and a workshop:

Both the video and workshop are:

Intervene was designed to be used among undergraduate, graduate, and professional college students. Secondary audiences for Intervene include university staff, faculty, parents, alumni, and other academic institutions.

The survey explored the degree to which students:

Use of Intervene resources

The following resources are available to the public at no cost, in the collaborative spirit of cultivating college health and well-being:

In lieu of payment: We hope you will consider helping us evaluate the success of this program (video and/or workshop) in various settings across the nation. Please take 5 minutes to share how you plan to use Intervene by completing this short Google form.

The video Intervene, and corresponding training, recognizes all members of a campus community as collaborative partners in the cultivation of campus health and well-being. It also demonstrates the versatility of bystander intervention as a strategy that can be used to address a variety of campus issues. Intervene draws upon a well-studied Pro-Social Bystander Intervention Theory, which suggests seven steps for successfully intervening in a problematic situation.

7 Steps to an effective bystander intervention:

The Intervene video models how students successfully navigate these steps in an authentic fashion, utilizing a variety of personal strategies. For example, some students communicate directly with the person causing the problem; some create a diversion or distraction to change the situation; still others call upon others (students, staff, and emergency personnel) for assistance.

Inspiration for Intervene came from American University's "Step Up" video. Their 5 1/2 minute video was one of the first of its kind to demonstrate how the same bystander intervention techniques can be used to address and prevent common college health concerns, including sexual assault, intimate partner violence, alcohol poisoning, hazing, and suicide.

Here's what some of the workshop participants had to say about Intervene:

While educational videos are often used to reach incoming students at orientation events, Cornell's Intervene is designed to build upon existing educational programming that occurs during New Student Orientation. It was also deigned to be applicable to (and resonate with) the entire student body, including older undergraduate students, graduate, and professional students.

The information contained in the copyrighted Intervene materials is based on the developers' best efforts to interpret a body of research and literature, and to translate this into practical considerations. The materials are informational and educational in nature, and are intended to be used as developed and prepared by the Skorton Center for Health Initiatives.

We are grateful to the following individuals and company for their generous contributions. Their donations made possible both the creation of our video and the evaluation of the broader Intervene program.