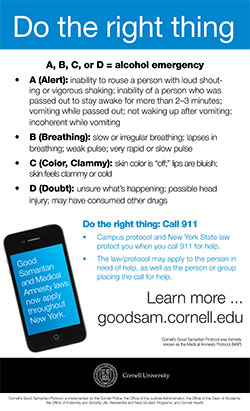 Alcohol poisoning – and other drug-related emergencies – can be life-threatening.

If you think your friend may have had too much to drink, is having an adverse reaction to a drug, or if they have sustained a head injury while drinking or using other drugs, it is imperative you call 911.

Under Cornell’s Good Samaritan Protocol (“Good Sam”), those who call for help – and those who receive help – in an alcohol- or drug-related emergency are protected from judicial consequences. (See details below.)

a) applies when the allegations under the Student Code of Conduct involve:

b) eliminates judicial consequences for:

d) does not preclude disciplinary action regarding other violations, such as:

In order for this protocol to apply …

The assisted student must agree to timely completion of assigned alcohol and/or drug education activities (e.g., participation in Cornell Health’s BASICS program at no cost for the first incident; case-by-case interventions for subsequent incidents). Additional assessment and/or treatment programs may be assigned by Cornell University depending on the level of concern for student health and safety.

Organizations involved in an incident must agree to take recommended steps to address concerns, such as educational follow up.  Multiple incidents may result in revocation of an organization’s recognition. The Good Samaritan Protocol is incorporated into the Sorority and Fraternity Life Event Management Guidelines. Additionally, in March 2011, the student-run Inter-Fraternity Council (IFC) passed a resolution (CU NetID required to access) which resolved to apply Medical Amnesty/Good Sam within their organizations.

Since the implementation of this university protocol in the fall of 2002 (formerly called the Medical Amnesty Protocol), we have found an increase in on-campus alcohol-related calls to the emergency medical services (EMS). However, the percent of these calls requiring a hospital emergency room visit has decreased. This suggests that the protocol is helping to reduce barriers to calling for assistance. For findings regarding the efficacy of the protocol, as well as suggestions for other campuses considering replicating Medical Amnesty Protocol/Good Samaritan Protocol, please see the peer reviewed journal article, Safety first: A medical amnesty approach to alcohol poisoning at a U.S. university (CU NetID required).

If you have any questions, please contact Cornell’s Office of Student Conduct and Community Standards (formerly the Office of the Judicial Administrator); studentconduct@cornell.edu or 607-255-4680).